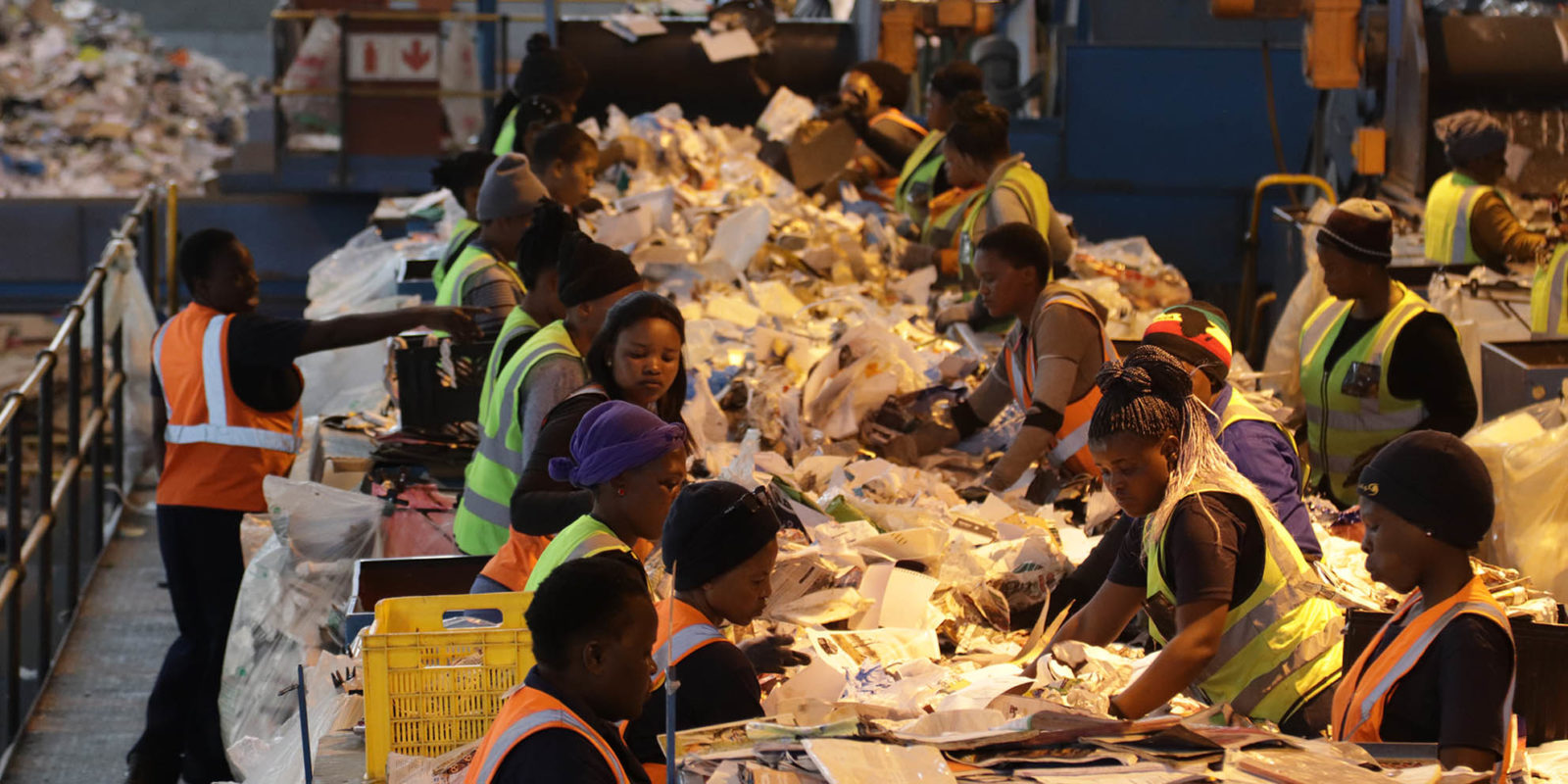 Employees of the Kraaifontein Integrated Waste Management Facility in Cape Town pick recyclables off of a conveyer belt. The facility sorts through approximately 1 500 tons of waste per month. (Photo: Tessa Knight)

There is no getting around the fact that plastics are useful, but how useful are they after consumers throw them into the trash? And how well is the country whose ‘national flower’ was once a plastic bag doing compared with the rest of the world?

Plastics are durable, and are widely used in infrastructure as well as in the medical and food industries. But their durability has also made plastics a serious environmental hazard. From microplastics at the bottom of the Mariana Trench, to the ever-growing Great Pacific Garbage Patch, it is clear that plastics have permeated every facet of life on Earth.

Most consumers encounter plastic in the form of packaging – from milk bottles to bubble wrap, it is almost impossible to shop for anything that has not been packaged in plastic at some point.

But according to Johann Conradie, director of the plastic recycling company MyPlas, plastic packaging is beneficial to consumers.

“There are nearly eight billion people in the world. Think of a cucumber. Without plastic, that cucumber is rotten in a few days. With plastic, it’s still edible in a week or more. We just couldn’t feed everyone without plastic.”

Addressing the Plastics Colloquium on 22 November 2019, Minister of Environment, Forestry and Fisheries Barbara Creecy said that the most important aspect of the circular economy is the conversion from “waste into worth”. 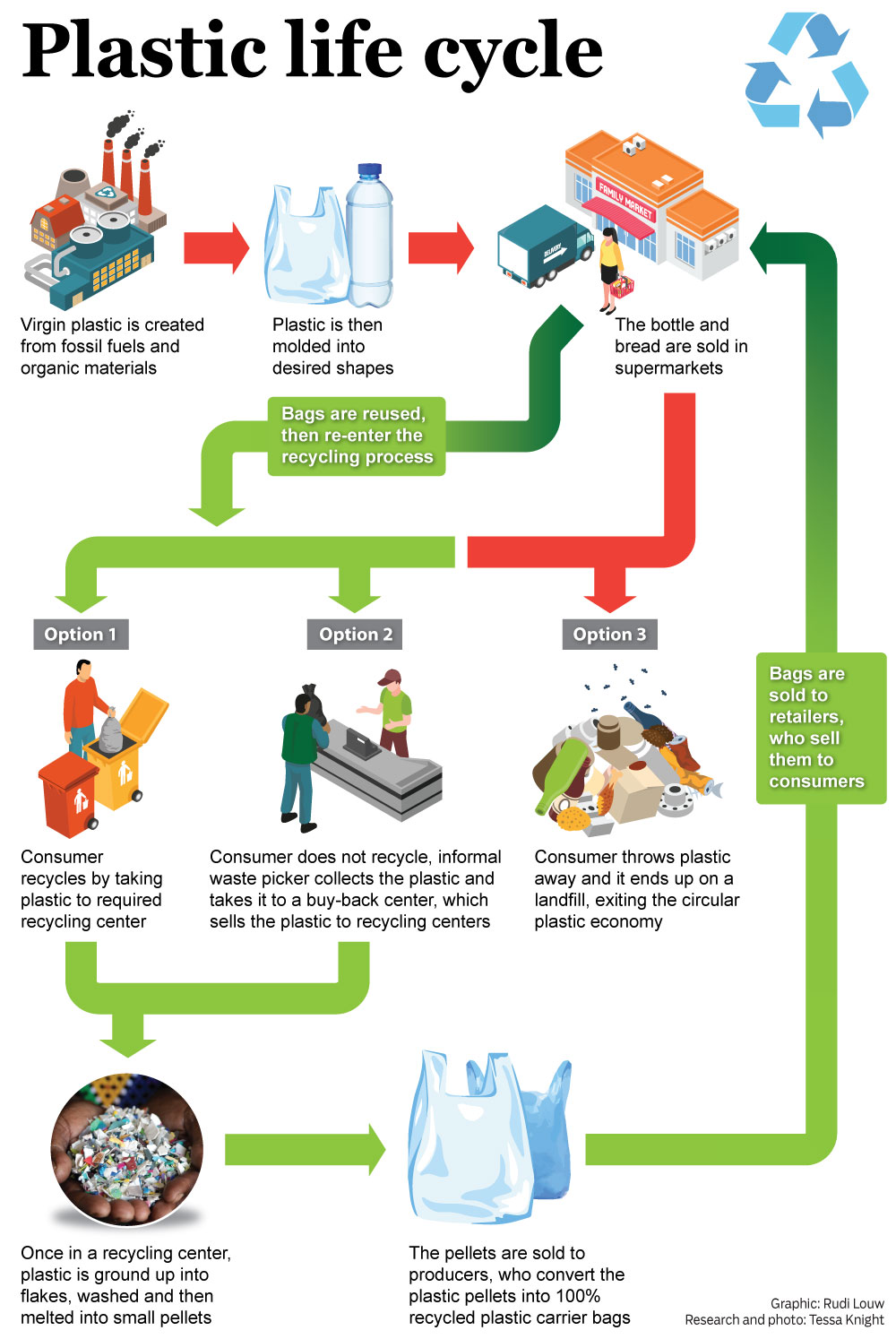 How much do South Africans recycle?

Despite what people may think upon seeing litter-lined streets, South Africa already recycles 46.3% of plastic waste that is collected in this country. According to Conradie, who is also chairman of the South African Plastics Recyclers Organisation (Sapro) board, there are about 300 recycling plants spread across the country.

South African recycling is primarily financially motivated, Conradie believes, as opposed to the European market, which is driven by environmental principles. European households, for example, have separate rubbish bins that are collected by municipalities, whereas most South Africans have to manually drop off recyclables at designated sites. (To find a site near to you use MyWaste.)

According to Sapro, 64% of South Africans have access to waste management, although Lorren de Kock, project manager for WWF’s circular plastics economy programme told Daily Maverick that most waste centres are localised in cities, leaving rural areas to fend for themselves. 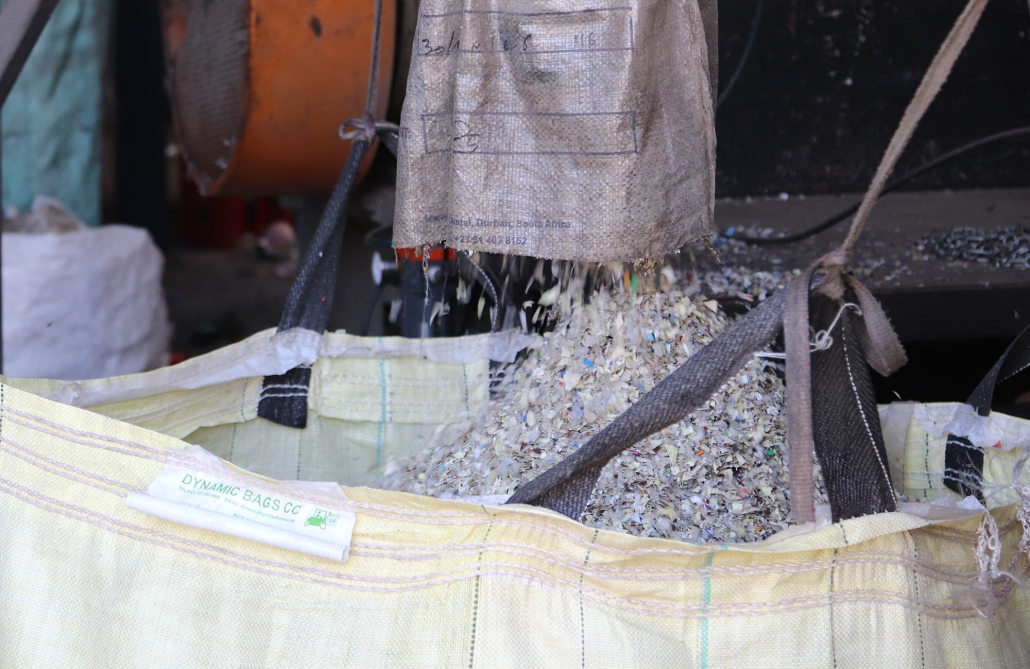 After plastic waste is sorted, it is ground up into colourful, tiny plastic flakes that will then be washed and melted down to form plastic pellets. (Photo: Tessa Knight)

In their 2018 study, Plastics SA found that more than half the recycling plants are located in Gauteng, with about 17% in KwaZulu-Natal and 14% in the Western Cape.

The South African industry is far less automated than it is in other countries. MyPlas employs 150 people working full-time to sort and process products, whereas Conradie believes the company would have about 10 employees if it was operating in Europe.

About 51% of all recycling plants across the country are small-scale, entrepreneurial businesses. According to Plastics SA, only 21% of the industry is white minority-owned.

According to Sapro, plastic recycling created 7,892 formal jobs in recycling centres in 2018, with a further 58,470 people benefiting from the supply chain, including informal waste pickers and small or family-owned businesses. 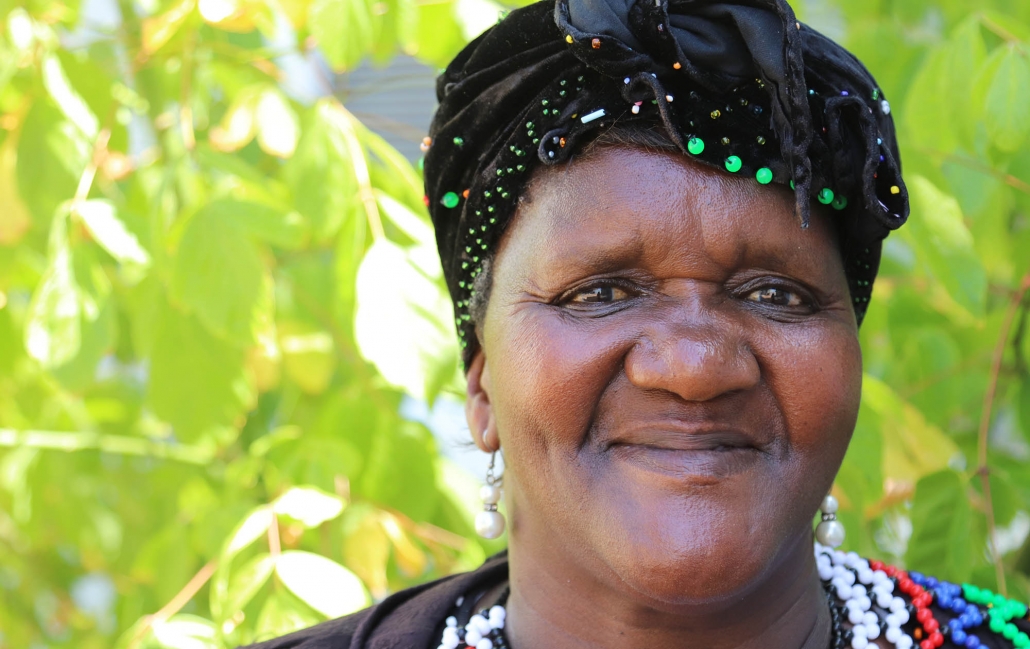 Nompumelelo Njana started collecting recyclable waste in Khayelitsha in 2007, in an effort to put food onto her family’s table. At 59 years old, Njana says she loves her job and wants to be recognised as an official worker, not an informal waste picker. (Photo: Tessa Knight)

Informal waste pickers comprise a large portion of the waste economy. For 59-year-old Nompumelelo Njana, collecting recyclable waste gave her the opportunity to put extra food on the table.

Njana started collecting recyclables in 2007 as an unemployed woman living in Khayelitsha. Now, she works with a group of about 200 informal waste pickers in her community.

“I love my job. Some people think I should be ashamed that I pick up waste, but it’s not waste. It has value, and I get to clean up my community,” Njana told Daily Maverick.

Waste pickers sell recyclables to buy-back facilities. The facilities vary in what they accept, but in general informal waste pickers can expect to cash in on certain plastics such as clear bottles, soda cans and other metals, and glass. 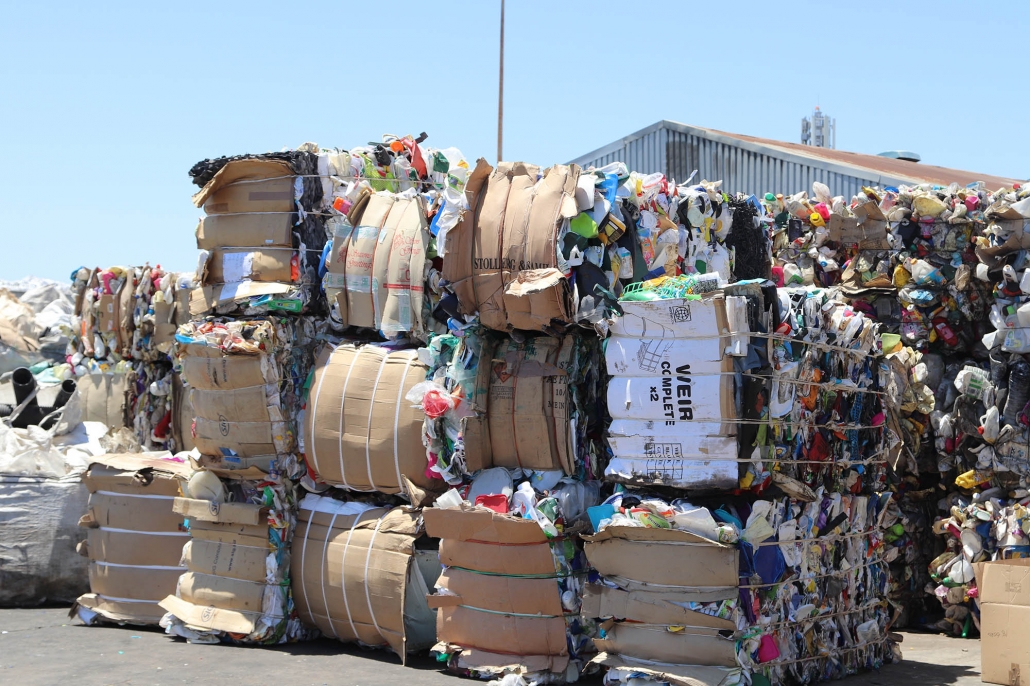 Plastic waste is first sorted before it is recycled at MyPlas, a plastic recycling center in Bellville, Cape Town. (Photo: Tessa Knight)

Njana gets R8 for a kilogram of soda cans, making the tin cans the most lucrative items on the waste-picking market.

But storing the valuable waste is particularly difficult for Njana and other waste pickers in her area, as they do not have access to storage space.

“We don’t have land, so we just keep the waste in our houses. My neighbours keep complaining because they say it brings mice and flies. But the City won’t give us land,” said Njana.

The 59-year-old wants the City to provide designated land for waste pickers to keep their collections safe, but has struggled to communicate her desires to people in power. Njana said she has asked the City on multiple occasions to assist her community of waste pickers, and will continue to make demands until her work is formally recognised.

Mayoral Committee Member for Water and Waste Xanthea Limberg told Daily Maverick that the City is investigating the current state of the informal recycling economy “to best inform the most appropriate ways to assist the informal waste collectors.”

According to Limberg, the City also incorporated informal waste pickers into its recycling projects years ago, with what she termed “positive and negative results.” On the positive side informal waste pickers were able to generate income and divert waste from landfills. But Limberg said the working schedule did not work, as participants were not able to to maintain “structured working scheduled that are required in delivering municipal services.”DM

According to Lisa Parkes from Sapro, all recycled plastic is washed regardless of whether you wash it first. Parkes said, “the main reason for washing recycling is so your bins don’t stink and become unhygienic”. If you want to ensure your bin stays clean, wash your recycling in grey water, not under running tap water.

All plastics are not recyclable. Multi-layer plastics, single-use plastics and materials made from multiple types of plastic can all be found in landfills and not in recycling factories. Brands also get away with saying a product is recyclable when in reality it cannot be recycled in South Africa, or only a fraction of a percentage of the waste is actually recycled.

Unfortunately this is not true. In South Africa, most recycling is driven by demand for recycled products. Plastic straws, for example, are made out of good plastic and can technically be recycled, but, according to Conradie, nobody bothers to recycle them. 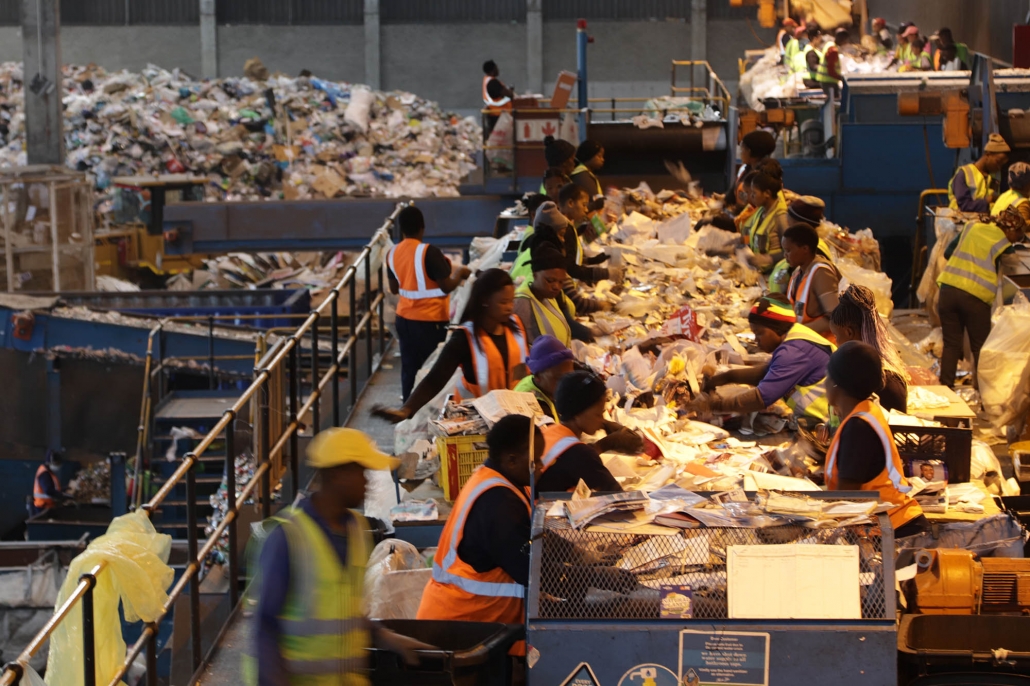 Employees of the Kraaifontein Integrated Waste Management Facility in Cape Town pick recyclables off of a conveyer belt. The facility sorts through approximately 1 500 tons of waste per month. (Photo: Tessa Knight)

“Straws are so small and so light, you can only imagine how many you need to collect in order to make any sort of financial gain. Waste pickers would have to comb the streets for weeks to make any profit,” said Conradie.

According to De Kock, biodegradables bring with them a whole slew of problems. In particular, it can be difficult for recyclers to quickly tell the difference between normal and biodegradable plastic. If one brand starts producing biodegradable water bottles, it is easier to stop recycling water bottles entirely than to risk biodegradables slipping into the mix and contaminating the process.

“People think you can throw them on to the ground and they will degrade like any organic material,” De Kock told Daily Maverick. In reality, biodegradables need very particular conditions to degrade, and South Africa just does not have the infrastructure yet. DM

MyPlas partnered with the SA Plastics Pact to tackle plastic waste and poll...
Scroll to top